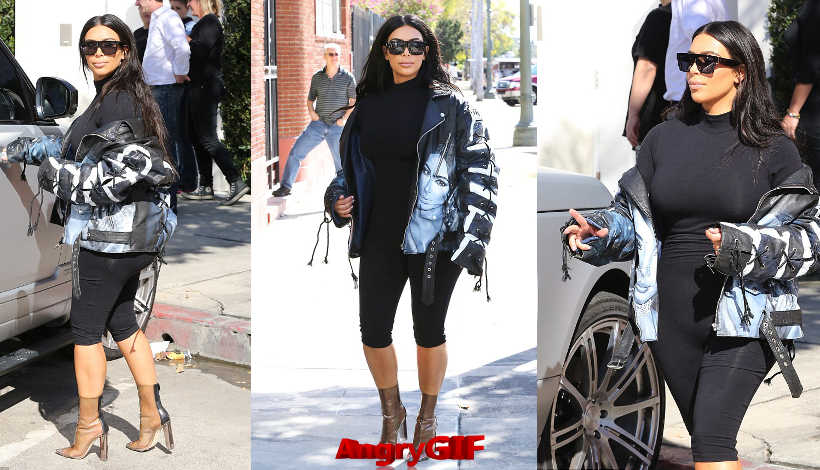 Kim Kardashian has stood by her husband through a series of celebrity feuds and most recently a barrage of Twitter tirades. And Kim Kardashian continued to show her support for Kanye West as she stepped out (once again) in a pair of his Yeezy 3 perspex boots on Wednesday in Hollywood.

The 35-year-old sported a black leather jacket with various pictures of her face printed across it, an item she was seen wearing on Sunday night. See Kim Kardashian news as she wears Yeezy perspex boots and spray painted biker jacket.

The reality star showed off her post-baby figure in pedal pusher tights and a clingy black shirt as she arrived to the Milk Studios. The dark haired beauty let her raven locks fall in waves over her shoulders as she covered her face with a pair of chunky sunglasses. Kim Kardashian rocked a low-key look with her make-up and brandished a soft pink manicure whilst running her errands.

Earlier that same day her husband Kanye, 38, lashed out at the Grammy Awards in his latest Twitter rant. The self-proclaimed ‘greatest living artist’ starting tweeting at around 11am Los Angeles time for an hour straight saying that the Grammys have a race problem, noting; ‘I feel the Grammy awarding system is way off and completely out of touch.’ He later said; ‘You like your black people a certain way also. You wouldn’t have Future perform and that man owned the clubs last summer.’ 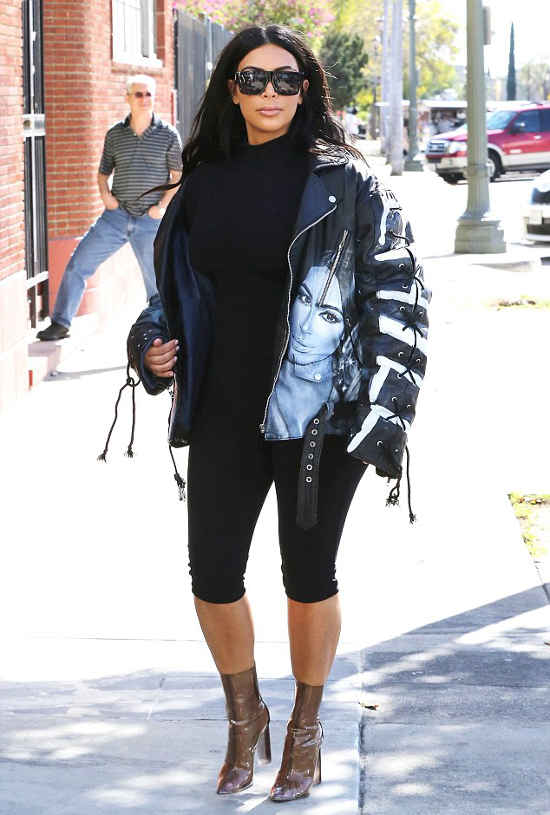 Kanye also appeared to threaten a boycott, writing; ‘If I’m not at the show next year then there is no show.’ And, towards the end of his rant, he revealed he would be releasing a new album this summer and giving out free Yeezys, the shoes he designs for Adidas, to members of the paparazzi. Meanwhile, it’s claimed Kim is so unhappy with her husband’s Twitter tirade where he claimed to be $53m in debt that she has asked him to get professional help.According to a Wednesday report from US Weekly, the 35-year-old mother-of-two has requested the Life Of Pablo hit maker get therapy. The magazine’s source revealed she is ‘very concerned and frustrated’ and that the couple ‘are having big problems that are escalating.’