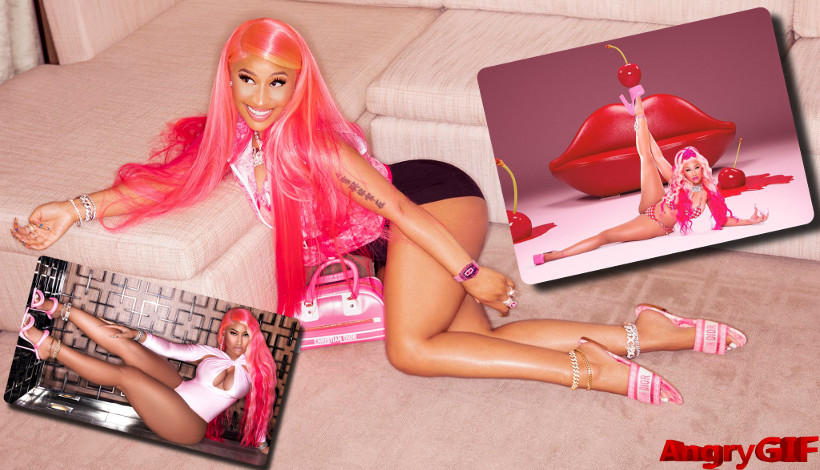 Nicki Minaj “Queen of Rap” has had a really, really hard few weeks.

No, I’m not talking about her former assistant’s accusations that Minaj had committed tax fraud, and that her husband, Kenneth Petty, was continuing a well-documented pattern of abuse by harassing her female staff members. I’m talking about the daunting, terrifying, and formidable undertaking of having to rename her new single.

“What should the name of #FreakyGirl be y’all? Yep we have to change it,” she tweeted in the sweltering final hours of July. Until then, Minaj had repeatedly teased the song as “Freaky Girl” on her socials, to the tune of millions of views and excitement from the Barbz over her imminent return. But, at the last minute, her team had run into an unexplained legal wall over the song title. Minaj didn’t say whether the name change had anything to do with the song’s sample of the Rick James classic “Super Freak,” just that she was offering three new options for fans to vote on: “He Want A Freaky Girl,” “Super Freaky Girl,” and “Nick James.”

A week later, Minaj dropped the cover for the single—officially called “Super Freaky Girl” despite “Nick James” eking out .6% more of the fan vote—on Instagram. “Thank you for over 200k votes but we could not legally use the name Freak or Freaky Girl,” she wrote. “You’re stuck with this.”

Ironically, “You’re stuck with this” is the perfect encapsulation of Nicki Minaj’s current state. She’s been throwing nothing but scraps to her loyal fans for years, and “Super Freaky Girl” is no different. The single is a phoned-in retread of what made “Anaconda” so exciting eight years ago: a sample of a song that everyone and their mother is highly familiar with, chopped and screwed in a playful, hyper-sexualized new package, complete with a few new braggadocious bars.

This is the standard formula that Minaj perfected over a decade ago in her first hits, and listening to “Super Freaky Girl” feels like eating junk food out of a package emblazoned with block letters that say, “New Look, Same Great Taste!” It’s recognizable and, if you don’t think too much about it, it tastes good. But eventually, you look down at the package and wonder when you’ll grow up and stop settling for this garbage.

Admittedly, when I listen to it, I can tell that Minaj is doing her best to penetrate my better judgment with her nefarious use of the world’s most potent drug—nostalgia. Listening to “Super Freaky Girl” no less than 20 times for this story reminded me of a simpler time when I was younger and held fewer moral scruples in the face of a catchy song.

I look back fondly on Bud Lite Lime-A-Rita-soaked evenings with friends, when we’d all flock to the dance floor (AKA the unfurnished portion of someone’s studio apartment) to scream the “Anaconda” outro together.

“This one is for my bitches with the fat ass in the fucking club,” we’d shout, despite not having fat asses nor being in the fucking club. But that’s just the kind of contagious, vivacious joy that Minaj used to bring to her music. Listening to “Super Freaky Girl” in comparison is like if I were to start buying malt liquor from the bodega and immediately text all my friends from college I haven’t spoken to in years: a desperate attempt at reliving a time when I felt my most powerful.

To say the song adds nothing of value to Minaj’s career is a wild and vast understatement. The bars are flat, the punchlines could’ve been written by a Nicki Minaj AI, and the Rick James sample is doing all the heavy lifting. Even Minaj seems to know that this song is a grave embarrassment.

In the lead-up to its release, she posted several videos of herself on Instagram set to the song, where she stares hollowly into the camera, rolling around dead-eyed and posing on various pieces of ugly furniture. If I didn’t know better, I’d say she had someone behind the camera threatening her. But instead, this is just Nicki Minaj in 2022: out of ideas and going through the motions, hoping the plummeting number of Barbz will bring the returns.